The saying has been on teacher’s walls, waiting rooms and my childhood refrigerator: “Life is a lot like jazz. It is best when you improvise.” However cliche George Gershwin’s quote may be, it speaks to jazz’s applicability to life as an art form grounded in spontaneity, conversation and connection.

Each of these communal processes were at the forefront of the latest performance by the Schwartz Artist-in-Residence Program. The Schwartz Center Virtual Stage kicked off Emory’s 18th annual Jazz Fest on Feb. 12 with an accomplished trio of touring jazz professionals — guitarist Bobby Broom, bassist Kenny Davis and pianist Gary Motley. Each musician has made their mark in the world of jazz performance, recording and touring with jazz icons like Sonny Rollins, Charlie Parker, Miles Davis, Fred Anderson and Herbie Hancock in venues from “The Tonight Show Starring Jimmy Fallon” to New York’s Carnegie Hall. But in the wake of the COVID-19 pandemic, these accomplished artists had to reconfigure their knowledge of live performance to fit a virtual setting.

Rather than performing live on stage, Broom, Davis and Motley created a pre-recorded concert from their respective offices using headphones that allowed them to listen to and layer their instrumental recordings on top of each other. Although these physical limitations inhibited some of the visual communication typically available to jazz improvisers, each piece performed served as a case study in imaginative and thoughtful musical conversation. The evening’s program struck a balance between classic jazz themes reimagined as vessels for modern experimentation and striking original compositions by Broom and Motley, respectively. 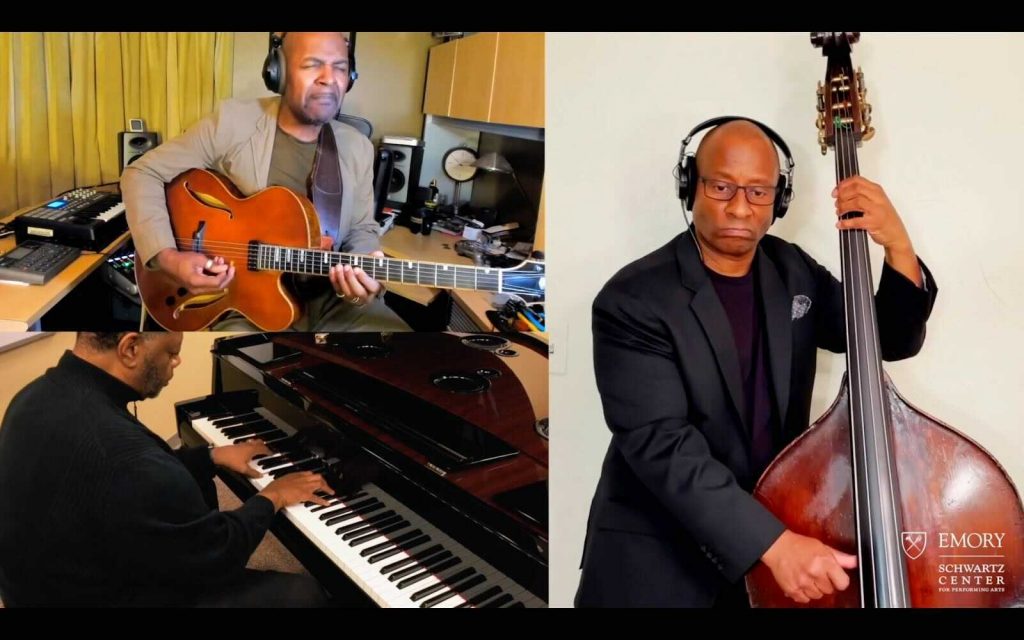 Motley’s original piece, “Changes,” was one of those songs you couldn’t help but move around to, especially given the freedom of listening at home rather than a watchful concert hall. The debut of his composition “Mandla,” whose title means “power and strength” in Zulu, was similarly engaging. Rhythmically surprising and masterfully conversational, the piece featured a captivating interplay between the piano’s uplifting melody lines and rhythmic punctuations by the bass and guitar. Broom’s 1995 original “No Hype Blues” was nothing short of a modern masterpiece which Broom himself described as his “contribution to blues melodies.” Leading guitar lines soared over masterful piano trills with unison melodies and introspective solos establishing a steady pattern of push and pull that guided the music to a contemplative conclusion.

The evening’s penultimate piece, “Stairway to the Stars,” featured nostalgic ascending chord progressions and sparkling piano flourishes that created an atmosphere of magic, reminding one of the imagination of childhood and hopeful secrets whispered into darkness. The trio closed their concert with a smashing rendition of “Oh, Lady Be Good!,” a 1924 hit previously recorded by artists like Ella Fitzgerald, Fred Astaire and the Benny Goodman Trio. A seminal sound with a captivating lightness and joy, “Oh, Lady Be Good!” paid homage to the history of the piano, guitar and bass trio in jazz music through striking riffs, broad harmonies and a fascinating dialogue between instruments that left the audience wanting more.

A masterclass with the artists followed the concert on the morning of Feb. 13 and featured a discussion between Broom, Davis, Motley and Emory student Sawyer Gray (22C). The musicians discussed the importance of steeping oneself in foundational jazz repertoire to create a soundboard for jazz improvisation. According to Broom, “improvisation is a misnomer,” as jazz musicians rely less on making up music as they go along and more on hearing and rearranging sounds they have already practiced to fit into the piece they are performing. In this way, performing is like speaking — jazz musicians piece together building blocks from a complex language of sound into coherent pieces.

In a pandemic that has been defined by a loss of daily interaction and simple intimacies, the Jazz Fest’s themes of building a common language, connecting with others and allowing room for improvisation seem especially poignant. One thing about the trio’s performance is certain: these musicians were expertly speaking a language of their own.