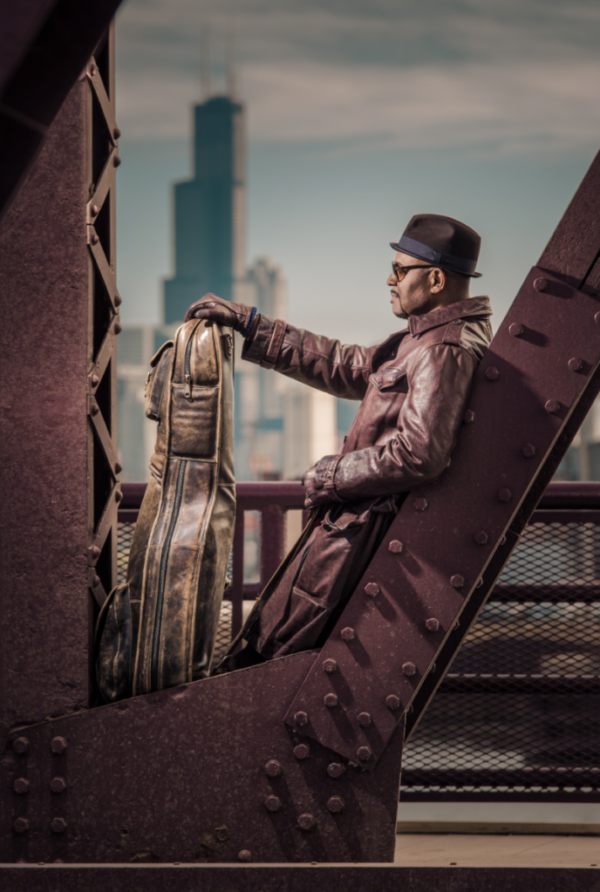 Guitarist Bobby Broom’s love of jazz has never blocked out his affection for the pop music which he grew up with. It’s been a frequent wellspring throughout his career.

“It’s a lot of what I do,” he acknowledges. “Material is material, and I’m just trying to do things that are interesting to me and that I feel might be interesting to people.”

Soul Fingers, his joyful 2018 release with his organ trio The Organi-Sation, produced by legendary drummer Steve Jordan, presents a whole album’s worth of such interesting things.

Drawn from Broom’s favorite songs of his childhood in the 1960s and ’70s, the album runs the gamut from The Beatles and Procul Harum to Bobbie Gentry and Motown.

It’s a path that has won Broom an impressive following, and significant acclaim, both within and outside his home base of Chicago.

Chicago Tribune critic Howard Reich hails the guitarist as “offer[ing] an object lesson in what an inventive jazz musician can do with a familiar song.”

Indeed, Soul Fingers is not Broom’s first album-length assay of the music of his youth. 2001’s Stand! took on pop hits of the 1960s. The new record leans toward the ’70s—with renewed perspective.

“The difference between Stand! and Soul Fingers is, frankly, nearly twenty years of life,” Broom says. “Hopefully that means that much more depth for me as an artist. I would hope that all of my experiences play a part in my ability to bring my new music to the table, and present it to the public in a way that’s even more convincing, heartfelt, and nuanced.”

Not to be overlooked is Broom’s exploration of these tunes with a new ensemble, featuring the deft, soulful organist Ben Paterson and shrewd drummer Kobie Watkins. The Organi-Sation, brought together as an opening act for Steely Dan’s 2014 summer tour, quickly developed a chemistry that Broom describes as “a wonderful surprise. It was incredible how much this new group jelled, and the level of music that we were able to make.”

The camaraderie is apparent within a few bars of the album-opening “Come Together.” Broom loved the inherent groove of the Lennon/McCartney classic, but wanted to try it with a stepped-up tempo. “I knew Ben and Kobie would swing it to death, and that’s what happened,” he says. “The cool thing about it is its seamlessness between funk and swing.”

Bobbie Gentry’s “Ode to Billie Joe” was the impetus for the entire album; Broom was so excited by the ambitious funk arrangement he’d created for it that he wanted to keep going. It’s easy to hear his inspiration, with the dark-timbred trio interactions augmented by smart horn backgrounds (courtesy of saxophonist Ron Blake and trumpeter Chris Rogers) and gorgeous solo from guest vibraphonist Justefan Thomas.

“Do It Again” is a salute to Steely Dan, to whom the Organi-Sation owes its existence. Its head-bobbing shuffle rhythm is deceptively deep. It offers a rich and inviting terrain for conguero Sammy Figueroa, even with its hook in 7/4 time. It also illuminates the glorious imagination of Paterson’s and Broom’s solos.

It was Jordan’s idea to include a bossa nova in the program, and Bobby’s to make it “While My Guitar Gently Weeps.” Acoustic guitarists Sergio Pires and Luciano Antonio, as well as percussionists Felipe Fraga, Watkins and Jordan and melodica player Andrew Toombs, add that color. Not only does Broom supply the lead guitar line with his clean, crisp tone, he also supplies the bass—another Jordan idea. “I’ve been known to play bass in my past, and I suppose Steve knew that,” Broom recalls. “He said with all the confidence in the world, ‘We need bass. You’re playing bass on this.’”

A standout even among his many favorite songs, Broom had for years sought an opportunity to record Seals and Croft’s “Summer Breeze.” The trio plays it with a sexy groove that the guitarist credits to Watkins. Paterson’s marvelous improvised flight and Broom’s own careening melodic variations, however, bear equal responsibility for the tune’s success.

With “Eyes of Faith,” Broom throws a change-up: an original composition, albeit one that fits in perfectly here. The band gives it a gospel veneer, with subtle strings supplied by arranger Matt Jones and his orchestra. Broom waits until song’s end to take its only solo. “I didn’t even think about it at the time,” he says. “But I’m glad I did that, because the important thing about this song is the melody.”

After the spark of “Ode to Billie Joe,” “Get Ready” was Broom’s second arrangement for the album. Another setting for horn and percussion accompaniment, this one makes precise use of African polyrhythms in an ensemble of Figueroa, Jordan, and Watkins, capped off by a frenetic conga solo from Figueroa. (Coincidentally, Jordan later told Broom that an Afrobeat “Get Ready” was the first song he ever performed in public.)

The stately, deeply moving approach the trio takes to Procul Harum’s “A Whiter Shade of Pale” shows a certain reverence for a song that means a great deal to Broom. It’s slow and quite faithful to the original, with only a half-chorus solo from Paterson and profoundly emotional playing on the guitar.

“I Can’t Help It” started life as a fun thing to play during sound checks on the Steely Dan tour. Another that blurs the distinction between swing and funk, it’s the latest of Broom’s “childhood” touchstones: He was 18 when Michael Jackson included it on his Off the Wall album. “It fits!” he says. “The end of my childhood, the arrival of a new era of music—and wow, Stevie [Wonder] wrote it! How much better than that can you get?”

Matt Jones’s string arrangements return for the closing cover of Bread’s “Guitar Man,” which speaks to Broom for obvious reasons. It’s also, he says, “an ode to George Benson and his influence. Breezy, carefree guitar; you float through a cloud, you hear the strings and you disappear into another cloud.”

Bobby Broom was born January 18, 1961 in New York City. When he was ten years old, his father came home with a stack of records that included one by organist Charles Earland. Bobby was enamored with the album, listening to it every day.

“This was before I knew what jazz was and I didn’t care,” he recalls. “I just liked the record.” It wasn’t until he heard the likes of Herbie Hancock and Grover Washington, Jr., on the radio—they were funky, but the deejays called them “jazz”—that he surrendered himself to the art.

By 16, Broom had a regular gig with bebop pianist Al Haig when the saxophone colossus himself, Sonny Rollins, invited him to go on tour. Broom declined, though he did perform with Rollins at Carnegie Hall later that year. Five years later, including one at Berklee, Broom at last joined Rollins’s touring band, ultimately spending two five-year stints with him.

Prior to joining Rollins, Broom declined yet another prestigious gig—a spot in Art Blakey’s Jazz Messengers—to instead sign with GRP Records and make his crossover jazz debut, 1981’s Clean Sweep. That record and its follow-up, 1984’s Livin’ for the Beat (Arista), attracted a following and promised a career in what would soon be known as smooth jazz.

Broom, ever independent-minded, though, instead jumped ship for Chicago, where he concentrated on straight-ahead jazz. He continued with Rollins, joined Kenny Burrell’s Jazz Guitar Band, and worked with Miles Davis, Stanley Turrentine, and his early idol Charles Earland.

In the 1990s Broom formed two trios: The eponymous Bobby Broom Trio and the Deep Blue Organ Trio. Deep Blue recorded four albums before its dissolution in 2013. Broom also made three quartet records (No Hype Blues, Waitin’ and Waitin’, and Modern Man) before deciding to focus on his guitar- bass-drums trio as his primary outlet, beginning in 2001 with Stand! (Premonition).

He solidified a lineup with bassist Dennis Carroll and drummer Kobie Watkins with 2006’s Song and Dance, which was also Broom’s first recording for Origin. That trio also scored with the vibrant 2008 live date The Way I Play and the 2009 Bobby Broom Plays for Monk, which Allmusic’s Rick Anderson called “a warm and wonderful tribute to one of America’s finest composers.” Makaya McCraven was introduced on drums for Upper West Side Story (2012), Broom’s first collection of all original compositions, and My Shining Hour (2014), his first standards album.

The Organi-Sation was born from the ashes of the Deep Blue Organ Trio, which had been a regular touring opener for Steely Dan. Unaware of their 2013 disbanding, the Dan once again called Broom in 2014 to book his “organ group” for their summer tour. Broom was reluctant to throw together another organ combo when he wanted to focus on his working trio, but McCraven wouldn’t hear of it. “He said, ‘Man, you can’t not do this,’” Broom recalls. “He said, ‘Let’s sit down, go through our rolodexes, and figure this out.’”

When they reached the name of organist Ben Paterson, Broom thought he might be on to something.  As Paterson was about to begin an extended stay in Chicago, he agreed to join the band. McCraven took a leave midway through the tour, with Watkins replacing him. The Organi-Sation quickly jelled as such: “I thought after the Deep Blue Organ Trio that I would never feel anything quite like that chemistry again,” Broom says. “And boy, was I wrong.”

If Soul Fingers was the product of that chemistry, it’s also a natural outgrowth of Broom’s personal artistic values. “The interpretation of popular songs doesn’t seem to be the mode du jour for jazz players, but I have to play music and a style that suits me, one that I want to hear,” he says. “This record—these songs, this presentation—is how I want to engage with the world.” •